For almost twenty years, Lilly has worked with churches that run the gamut from seeker to mainline, from mega church to small traditional, everything from Foursquare Gospel to American Baptist, Presbyterian to Vineyard. Lilly was Director of Spiritual Formation at Christ Church Glendale (Episcopal) in Cincinnati, Ohio from 1998 through 2004. In the fall of 2001, with a few leaders and some enthusiastic students, she started an experiential worship service called Sacred Space. Sacred Space uses multi-sensory prayer, silence, art, discussion and multi media, integrating ancient and future forms of worship to bring liturgy new life. In 2004 she helped found Map Room; an ecumenical experiential worship community for college and post college adults in and around the University of Cincinnati. In 2005 she started the Thinplace gatherings, founded freerangeworship and began curating Sacred Space prayer experiences nationwide and in the UK.

She is an author, artist and atmosphere architect. Writing for Youth Worker Journal, Zondervan (SACRED SPACE with Dan Kimball) , and Youth Specialties, and blogging at Godspacelight.com each friday. (freerangefriday posts). She is part of the Soul Care team for the National Youth Workers Convention( YS) and curates the Sanctuary Prayer Space leading contemplative workshops and designing prayer stations.

Lilly and husband Rob live in Nashville, TN  where they host thinplaceNASHVILLE. They have two young adult sons and a khaki dog named #Jakeadoodle. She enjoys great sunsets, good coffee, and lots of dark chocolate. 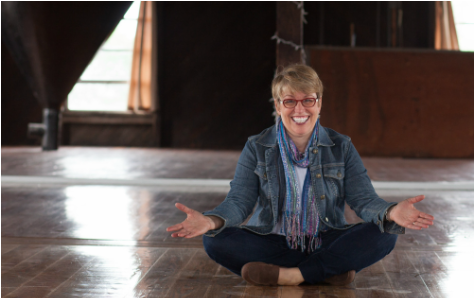 It is time to open the gate and move our worship beyond singing. Since 2001, I have had the pleasure of curating and creating inter-active, multi-sensory worship experiences that I call experiential worship or Sacred Space. I began with a simple interactive prayer room we used at the end of our youth group time each week and it grew into a full blown worship gathering called “Sacred Space” with participants of all ages engaging God through prayer stations as the talk/sermon. Since then, I’ve curated Sacred Space prayer rooms and Prayer Experiences at gatherings and churches all over the country and in the UK. My passion is to help people of all ages engage God using all their senses and various learning styles. And since only 20% of the world learns through their ears my desire is to help the 80% of us who learn a different way to worship God. Moving our worship beyond singing and listening and beyond sitting and watching to actually participating. Click HERE to see example pictures.

“Lilly intuitively sets a table for people to feast on the beauty and mystery of the divine.”
-Mike King
President of Youthfront,
​Kansas City, KS